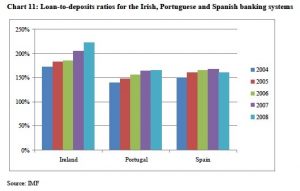 150 protestors shouting “Cowen, Cowen, Cowen, Out, Out, Out” pushed open the gates of Government Buildings in Dublin on Nov. 22nd after a 100Bn. Euro [1] bailout and IMF intervention the day before.

Avoiding answering allegations of his own involvement, Brian Cowen, Prime Minister (Taoiseach) declared he would dissolve parliament (calling elections) but only after “passing the budget” (a statesman to the last). One has to suppose that the Taoiseach still believes that he shall be able to pass the proposed budget. Financial times commentator, John Authers, in an interview with Vincent Browne has his doubts. 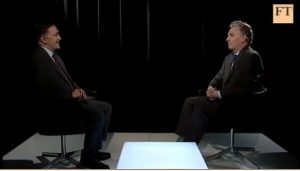 Cowen was finance minister 2004 to 2008 when loan-to-deposit ratios rose above 200%[2]. In 2006, 70% of all new loans in some Irish banks were for speculative property deals. When the property property bubble collapsed Ireland’s debt to GDP ratio rose from 25% to 66% in two years. 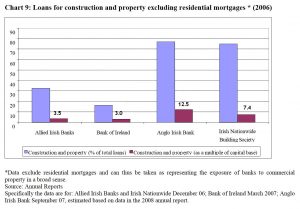 “[an Irish] genuine economic miracle … eventually gave way to a speculative frenzy driven by runaway banks and real estate developers, all in a cozy relationship with leading politicians. The frenzy was financed with huge borrowing on the part of Irish banks, largely from banks in other European nations [particularly the UK… NAMA hung Irish] taxpayers suddenly on the hook for gigantic bank losses, even as revenues plunged, the nation?s creditworthiness was put in doubt. So Ireland tried to reassure the markets with a harsh program of spending cuts. Step back for a minute and think about that. These debts were incurred, not to pay for public programs, but by private wheeler-dealers seeking nothing but their own profit. Yet ordinary Irish citizens are now bearing the burden of those debts.”

The EU expressed ‘satisfaction’ at the four-year budget plan. But healthy doubts remain over NAMA and the budget. The Irish corporate tax rate, the lowest in the Eurozone, is also on the table but political instability is mounting and seems likely to explode in Saturday’s march for a better way called by trade union movements opposed to austerity measures. A major march is planned in Dublin on Saturday to protest “austerity” measures.

[1]: About 90 Billion Euros from the Eurozone rescue fund and 7 Billion pounds from the British. One wonders if this British largesse is to save the Euro (or could it be to save themselves) The British Chancellor, when asked, claims that Britain is simply being (laughable as it may seem to anyone who reads their history) a “good neighbour”.

[2]: Yes this is high and grew when other countries kept their levels stable (see chart), more importantly it was recognised by experts as lacking.
The document “Irish banking crisis and regulatory stability policy 2003-2008” states the following on page 23: “At the systemic level, a far greater increase in capital requirements on risky loans, if implemented several years earlier, would have made a major difference. A ceiling or penalty on very high loan-to-deposit ratios for banks would also have been effective.”

That same report also adds: “At the micro-prudential level, a cap on property-related lending would have curbed the worst excesses, as would have increased, accompanied by a more aggressive stance on governance in the case of one or more specific institutions.”

Europe On The Brink