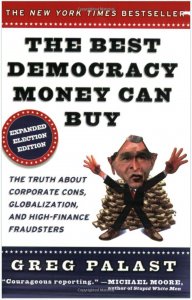 Last June, on Page One of the San Francisco Chronicle, an Associated Press photo of a mass of demonstrators carried the following caption: “TENS OF THOUSANDS OF VENEZUELANS OPPOSED TO PRESIDENT HUGO CHAVEZ…”

The caption let us know this South American potentate was a killer, an autocrat, and the people of his nation wanted him out. The caption continued: “[Venezuelans] marched Saturday to demand his resignation and punishment for those responsible for 17 deaths during a coup in April. ‘Chavez leave now!’ read a huge banner.”

There was no actual story in the Chronicle — South America simply isn’t worth wasting words on — just the photo and caption. But the Chronicle knew no story was needed. Venezuelans hated their terrible president, and all you needed was this photo to prove it.

And I could confirm the large protests. I’d recently returned from Caracas and watched 100,000 march against President Chavez. I’d filmed them for BBC Television London.

But I also filmed this: a larger march, easily over 200,000 Venezuelans marching in support of their president, Chavez.

By the next month, when the New York Times printed a photo of anti-Chavez marchers, they had metastasized. The Times reported that 600,000 had protested against Chavez.

Once again, the larger pro-Chavez demonstrations were, as they say in Latin America, “disappeared.” I guess they didn’t fit the print.

To view the rest of this article, please check out www.alternet.org a project of the Independent Media Institute, and one of our favorite sites dedicated to strengthening and supporting independent and alternative journalism. You’ll find a mix of news, opinion and investigative reports including more than 7,000 stories from over 200 sources.

Then, for more on the truth about what’s really going on in Venezuela, please visit www.gregpalast.com where you’ll find all of Greg Palast’s reports including his interview with President Hugo Chavez.

This article was based on a contribution to the compendium, “Abuse Your Illusions,” released this month by Disinformation Press. Oliver Shykles, Fredda Weinberg, Ina Howard, and Phil Tanfield contributed research for this report.

Greg Palast, an investigative reporter for BBC television, is the author of the New York Times bestseller, “The Best Democracy Money Can Buy” (Penguin/Plume 2003).

Europe On The Brink